Happiness is a choice 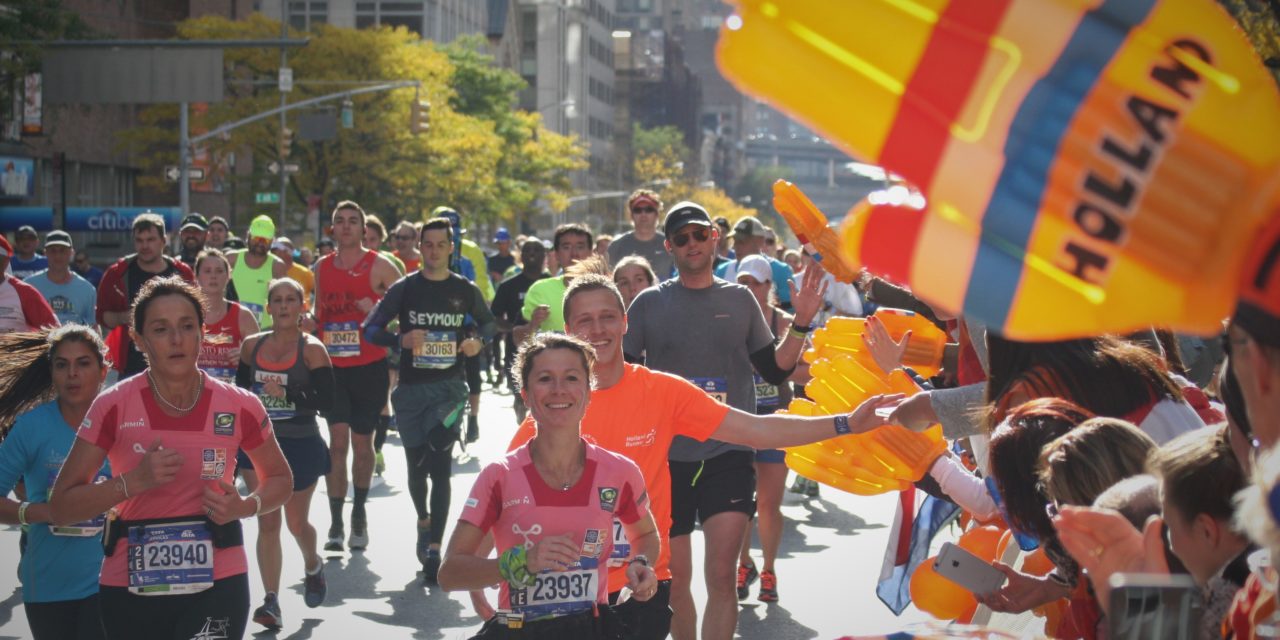 This second blog post is about my first book: Happiness is a choice. In the previous post, I mentioned that the book wasn’t planned for, but it ‘just happened’. This probably needs some explaining…

The story starts on an evening in March 2016. I was in a pub in London having a drink with my Dutch colleagues, who told me about their plan to run the New York City Marathon in November later that year. It was still early and I only had two drinks when they asked me to join them, but without much hesitation we shook hands and there was no way back.

My training program started a few days later and from then onward, I was running three times a week. A normal week consisted of two shorter runs during the week and one long run in the weekend. I quickly learned that training for a marathon does not only take discipline, but also a lot of time. My social life suffered quite a bit during the summer as most of my long runs were on Saturday mornings, which meant no late nights on Friday and not a lot of energy on Saturday after the run.

Running long distances can be boring, so I started to listen to audio-books during my runs. Three runs a week pretty much equaled one book. Most of the material I read or listen to is non-fiction, on topics ranging from business and economics to psychology and health. Unfortunately, my long-term memory isn’t particularly good. That is why a few years earlier, I had started to write down notes of the (for me) most interesting insights.

Except from the long runs, I didn’t do much in most of the weekends. With the increasing number of notes and the additional time spend behind my laptop, this was the perfect moment to create some structure in my messy word document. As I began to order the notes, I also did additional research on certain topics and added personal context and experiences, to reinforce the key learnings and ensure that the notes became my own.

Most of the notes were focused on the psychology of happiness and bringing theory and practice together. I asked myself: If these insights are so valuable for me, could they be relevant for others as well? That’s when I decided to use my notes to create a short book to share with family and friends. From July until October I worked on it almost every day. Besides my normal job, my life was structured around two things I never thought I would enjoy so much: running and writing. It was a powerful combination as running gave me a lot of time to clear my head and then think about what I was going to write next. Writing forced me to think more deeply than I had ever done before, because I knew that others would get to read it as well.

With every page I wrote, I got more confident that the insights and learnings in the book could help anyone to increase his or her happiness. Just before I finished the book, a friend told me about the relatively easy process of self-publishing on Amazon. As I now had this book anyway, why not try to reach more people? I thought about it for a few days and decided to just do it. But first, a handful of friends proofread the book and I used their input to make some final changes. Then I found two cheap freelancers; one to design an image for the book cover (on Fiverr.com) and one to put the book in the right eBook format (on Upwork.com).

During Christmas 2016, it was time to push the button and self-publish my eBook on Amazon. On Amazon Kindle, you can make your book available for free for a maximum of five days. As my goal wasn’t to make money, but simply to reach more people, this is what I did. When many of my friends downloaded the book on the first day, it got picked up by the Amazon algorithm and it quickly reached a high position on some of the ‘top’ lists of free eBooks. That is when people outside my own network also found it and the number of downloads increased rapidly. In the first five days, the book was downloaded close to 1,000 times. It became number 1 best-seller for all free eBooks on Amazon.nl and even number 1 best-seller for free eBooks in the mental health category on Amazon.com.

After the first five days, the promotion period was over and the book shifted to the paid eBooks section. As the rankings for both are separated and pretty much everyone I knew had already downloaded it, the book quickly dropped and didn’t get much more exposure. But over the year, it still got another 150 downloads. Altogether not bad for a first book that was never planned for. It reached over 1,000 people and became a number 1 best-seller for a few days, but even more rewarding was the positive feedback from friends, family, and even people I don’t know. Many reached out to tell me that they recognized some of the challenges in the book and how reading the book had benefited them.

Even though it was my first book and it wasn’t actually planned for, I still feel confident that anyone who reads it can get some new insights that can help to take his or her happiness to the next level. The focus of this blog post is on the process that led to writing this book. For more information about the book itself and to download it for free, you can go to this page.

Writing my first book has been such a great experience. Thinking deeply and then putting your thoughts on paper is an extremely satisfying feeling. And while writing takes quite a lot of time, the process of self-publishing your book is simple. When the book was finished, I also had 30 hard copies printed to give away. And even though it’s very short, I was filled with pride when I finally had a copy of the book in my hands. A book with theories, examples, and ideas that can help anyone to become happier.

By the way, for those who are wondering: I finished that New York City Marathon in 3 hours and 53 minutes, which was well under my 4-hour target. It was a life-changing experience and something that I will never forget. Not just running the marathon in NYC itself, but the entire process and everything that came from it.

Leave a comment to share your feedback on the book or if you have any questions about the writing or self-publishing process. And feel free to send an email to wouter@inspirationpub.com if you want to get in touch.